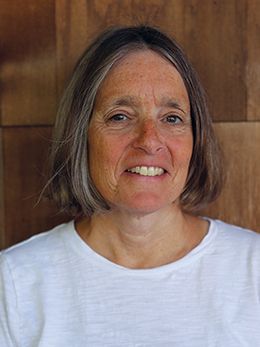 
Sharona Barzilay began teaching science at College Prep in 1980. She has held many vital roles at College Prep over the years, including Assistant Head of School / Academic Dean, College Counselor, and Director of Admissions. For many years, she has taught the popular course Issues in Science.


How do you describe your Issues in Science class?
Issues in Science is a bioethics class that focuses primarily on issues in medicine, and public health. There are lots of simulations in the class and a focus on discussion. One of the highlights of the class is how little I have to say. Last year I assigned an article about the events at Memorial Hospital in New Orleans following Hurricane Katrina—when some doctors allegedly euthanized a number of patients because they couldn’t get them evacuated. I walked in to the room said, “I’m not saying a word today.” The students carried on a phenomenal conversation without a peep from me. That was an absolute teaching highlight for me.
Do the topics constantly change over time?
I can open a newspaper, get diverted from the topic that I was planning to discuss that day, and switch to a brand new issue. Even the students’ responses to topics that come up every year have changed tremendously. We were recently talking about how to fairly allocate organs for transplant and whether there should be a marketplace for organs to be bought and sold. Fifteen years ago, the students would have been horrified by the thought of organ sales. Today, many feel that it’s the right thing to do because it protects the sellers, who are often very poor, creates better conditions for the surgeries, and ultimately yields more organs for distribution.
What is the central dilemma of the trial project your class works on each year?
The dilemma focuses on a family that gave birth to conjoined twins. They were very religious Catholics who wanted God’s will to prevail. They did not want to separate the twins. Without separation, both twins would have eventually died. With separation, one would have a good chance at life and the other would die during the surgery. The parents did not want to have to choose one twin over the other. In our class, the defense has won about half the time and the plaintiffs have won about half the time. It’s a beautiful exercise to watch because students get so invested. Many of them enter the trial thinking that the outcome should be a no brainer—that you have to separate the twins and save one. And so many of them are deeply conflicted by the end of the exercise. A great outcome to me is for a student to come in to the class having read a case study and feeling, “I know where I stand,” and come out of the class feeling, “I am so confused.”
What skills or experiences do you hope students get out of the class?
I want students to get some practical knowledge and forethought. They will eventually all encounter some of the issues that we discuss in the course. They might not need assisted reproductive technology in the future, but they will certainly be dealing with death and dying at some point in their lives. And those who go on to careers in medicine or public health will be facing these issues frequently. Being able to think analytically and to question their assumptions are important habits that the course develops. Earlier this year, the entire class agreed that it was unethical for disabled people to select embryos that are disabled in the same way that they are. In cases such as this, it’s important for students to learn to argue against themselves and to gain more nuanced perspectives.

In recent years, what events have captivated your students?
When the Ebola outbreak happened there were tremendous allocation issues. There were probably five doses of ZMapp that were available to doctors in Africa. Who do you use them for? Do you use them for the healthcare workers? Do you use them for the patients?
How often does technology come up as an instigator in
ethical dilemmas?
Always. When the first test tube baby was born, it made huge headlines. Now it’s completely pro forma. The speed at which technology changes is accelerating and the laws and the legislation to keep up with technology are not accelerating. Therein lies a rub because we don’t know how to reconcile these vast advances in technology. What happens when a surrogate carrying a baby has been paid $15,000, the baby has a defect, and the parents want the surrogate to abort the baby? There’s no law around that. What do you do? When couples have frozen embryos and then they get divorced, who gets custody? Increasingly there are contracts addressing this, but 5-10 years ago those didn’t exist.